Arrugas/Wrinkles (by Paco Roca) - A review 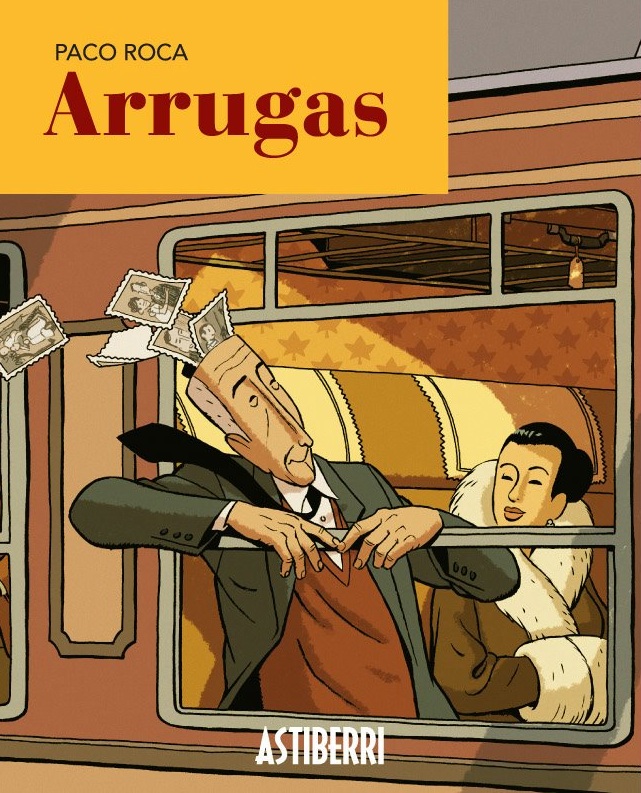 Location: Spain
Creator: Paco Roca
Format: Graphic Novel
Publisher/Year: Delcourt (French); Astiberri (Spanish)/2007
Genre: Realistic fiction
Theme: A look at the lives of patients with Alzheimer's in an old age home, both current as well as the lives built on their memories of yesteryear

This book is a charming look at the lives of Alzheimer's patients, centred on a venerable old protagonist sent to an old age home for patients by his son, no longer able to bear the strain of dealing with a father whose mental faculties are no longer serving him as well as they should after the onset of Alzheimer's. The emphasis here is on 'charming,' as this could so easily have been a dark and wistful examination of the suffering of Alzheimer's patients. Instead, Paco Roca, in part inspired by a friend's ailing father, chose to look at the lives of a group of patients at the home who compensate for their condition by living life with an almost childlike zest.

The plot is not much more than the theme I outlined, with the protagonist and his new friends at the home making it through day to day life while facing challenges, and occasionally embarking on an adventure of sorts, be it in the real world or in the memories and imagination in their heads. The setting of this story is not truly Spain, to be honest, but in two 'places.' One, the all too real old age home. The other, inside the minds of these patients, who have little left in their heads but old memories. As they live the final years of their lives, real and imaginary, to the fullest, there is a quaint sense of adventure for the readers that does not really take away from a look at the problems faced by the protagonists.

This is a book that would make many of us sad, but in many ways is a celebration of the lives of our parents and grandparents (and elders in general), some of whom do face problems thanks to Alzheimer's. Roca skillfully weaves a narrative and style where the reader engages with characters and feels their joys (as well as their sorrows), and on the whole the work is delightful.

There is not much I can truly say about this book, as it is something worth feeling rather than describing. Read it if you can (it's available in Spanish, and in French as Rides), but if not there's also an animated movie based on it. I haven't watched it, but it seems to be quite faithful to the book based on what little I have seen.

On a different note, this is my 20th book review for this challenge, which puts me at a quarter of the final target. Thanks to my rather hectic January and March I am running a couple of weeks behind, but I am catching up quickly! I'm fairly pleased to note that I have managed 20 books in 20 different countries without any repeats, but I'm fairly certain it's just going to get harder to maintain that level of variety as I go along. Still, fingers crossed for the rest of the challenge!
Posted by Unknown at 09:17