The Wise Woman, by Philippa Gregory - A review 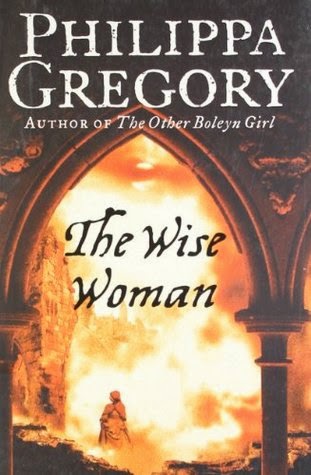 Sorry about the lack of updates. It's been a nightmare of a month at work and dealing with illness, but here I am with my Book of the Month review for March in the Around the World in 80 Books challenge.

This month's book is The Wise Woman by Philippa Gregory. I am not the biggest Philippa Gregory fan in the world per se, though I can see the merits of her style for those who are into the subject matter. As for this book, it feels a bit rough around the edges, which is understandable for one of her early works and feels a bit contrived and forced at times. I say this as someone who loves 'contrived' plots when done well, but this really does not seem up to the mark. Of course, it doesn't help that apart from the historical context this is not my book at all.

Since the book did not make enough of an impact on me and I read it 2 conferences, 3 presentations and 2 bouts of illness ago, far too long to truly remember every bit of this plot, I shall cheat and let Goodreads/Barnes & Noble summarise it for me:

Alys joins a nunnery to escape the poverty of her life on the moor with her foster mother, Morach, the local wise woman with whom she lives as an outcast, but she soon finds herself thrown back into the world when Henry VIII's wreckers destroy her sanctuary. Summoned to the castle as the old lord's scribe, she falls obsessively in love with his son Hugo, who is married to Catherine. Driven to desperation by her desire, she summons the most dangerous powers Morach has taught her, but soon the passionate triangle of Alys, Hugo, and Catherine begins to explode, launching them into uncharted sexual waters. The magic Alys has conjured now has a life of its own -- a life that is horrifyingly and disastrously out of control.

Is she a witch? Since heresy means the stake, and witchcraft the rope, Alys is in mortal danger, treading a perilous path between her faith and her own female power

The plot, honestly, is lacking. The characters, with a few exceptions, feel ill-defined, and it's not easy to empathise with some of the character choices in the book. Oh, by the by, this summary above fails to mention Hugo and his family's role in burning her nunnery. Murder, rape, arson... all forgiven if you're a reasonably handsome guy. So, not the healthiest relationship to begin with. Alys' slightly terrifying desperation leads to her attempts to kill Catherine, and after some intense lovemaking involving the three of them she does eventually succeed - only for Hugo to have an arranged match with someone else. This makes sense considering he was a lord's son in that era. Sorry, Alys!

So, yeah, it wasn't my favourite book, and it was also a lousy time for me to read it and try to appreciate it (so apologies for how dismal this review is). Plot and characters were weak and ill-defined, as I stated, and the story was largely propelled by strange events. As for the 'history' behind the 'historical fiction,' I just wasn't getting the feel of Tudor England. Philippa Gregory did eventually get better at it, and whether or not one likes The Other Boleyn Girl there are at least some elements of what the Tudors were like (but merged with a bit of regency style, to be honest). In this, apart from passing references to remind the reader that this was in that time period, there is nothing to truly let one get a feel for the location and the time period. In some cases this could be considered a trait that makes a book feel like it take place anywhere and anywhen, but this is not one of those cases. I do like my history and I have never been that great with romance novels without other stuff to hold my attention. Alas, on this occasion the historical setting was largely contrived as well, which made it very hard for me to get through.

Final word? I wouldn't really recommend it, unless for some reason you are looking to study the evolution of Philippa Gregory. I wish I could truly analyse this book and tell you why I did not engage with it, but it's pretty hard to do so weeks after having read this book, for which I do apologise.

In slightly better news (for me), my April looks a lot clearer with only 1 big deadline, so I hope to begin my reading catchup in earnest!
Posted by Unknown at 17:39

Email ThisBlogThis!Share to TwitterShare to FacebookShare to Pinterest
Labels: Around the World in 80 Books, Book of the Month, Books, Philippa Gregory, The Wise Woman