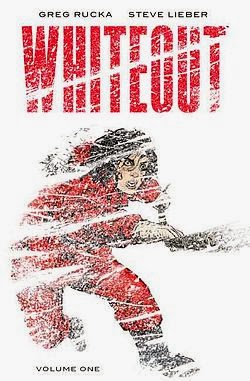 Not sure if including graphic novels in this counts as a cheat, but if I recall correctly there were no restrictions in the challenge rules regarding the validity of graphic novels. Whiteout is admittedly made a little more complicated by the fact that it was originally a miniseries that got collected nearly a decade after publication, but it speaks volumes about Rucka's smooth writing and transitions that I was convinced at first that this was an Original Graphic Novel (aka OGN, which is a graphic novel intended to be published exactly as that, in the form of one complete story/novel rather than a collected edition). Some of you might have watched the movie based on this and come away a little less than satisfied. To give credit to the movie, it strived to represent the story, and performances were good. But it never stood a chance of replicating the intensely personal feel embedded in the novel, and without that it comes off like a relatively bland TV movie that ended up on the big screen instead. But the focus of this review is the book, not the movie. So let's get down to it!

First up, might as well understand a little bit about Rucka as a writer. Before Whiteout came out, Rucka was essentially a novellist, but it must be stated truthfully that for all his merits he was at most middle rung in that arena. But those merits I mentioned? Some of those translated beautifully to comics as a medium, and Whiteout became the first clear example of that. Strong plotting and realistic characters abound in Greg Rucka's work, and intense attention to detail (particularly when it comes to the setting) is a hallmark of his work. Elaborating further on the 'realistic' characters part, Rucka has a noted skill when it comes to writing female characters. He does not write them as 'strong female characters' according to a trope - he merely writes them as people worthy of respect. He might occasionally focus on the specific traits that make them strong female characters, but in a way that does not take away from how real they are. There is a reason that he is arguably the most acclaimed modern Wonder Woman writer, a character that has remained an enigma to almost every writer who has had to deal with her. These traits, while important for his career as a novellist, worked so well for comics that he got elevated to a modern comics pantheon of sorts, making him one of the most respected comics creators around.

That aspect regarding writing female characters well? That shines through perfectly when it comes to US Marshall Carrie Stetko, the protagonist of Whiteout. A tough as nails character, she's not the most cheerful of folks (then again, how many Marshalls would be cheerful about being stationed in Antarctica?). It's a challenging place, and the relative isolation makes it worse. She is civil with others, but rarely friendly. Carrie's there to do a job, and beyond that everything else is secondary. And that job? It gets pretty complicated when the first ever murder in Antarctica happens on her watch. All while remaining on high alert about a potential snowstorm that could jeopardise the safety of everyone at the station and also give the killer a great chance to get away. Teaming up with British agent Lily Sharpe, it's a race against time to catch the killer and end his killing spree before the storm hits.

I won't tell you much more, because a murder mystery/thriller is best left unspoiled. I will at most tell you that she does eventually come out on top. But considering a sequel titled 'Whiteout: Melt' turned up a few years later with Carrie back in the fray, it seems safe to say she makes it out of this one okay.

This is not the most spectacular murder mystery. The actual perpetrator is pretty obvious from the moment we as readers first encounter them (not specifying the gender!). But it's still pretty well crafted as a novel, particularly for Rucka's first real attempt in this format. And where it stands out is the characterisation. Readers don't come away from this with a feeling that they have read hollow pastiches of standard characters, but real people approaching this problem in a very real way. Carrie Stetko as a protagonist the readers engage with because one sees her dealing with challenges like any real person in this situation, and coming out on top not because of some superheroic ability to defy the odds but because she battles through whatever shit she has to deal with while clearly not being okay with it. Another strength of Whiteout lies in the attention to detail when it comes to the setting. Rucka's research clearly worked, but at least as much credit must be given to the art of industry veteran Steve Lieber, who replicated many parts of the Antarctic research base(s) and the surrounding areas & conditions with stunning detail that allows the readers a chance to feel what it's like for the characters to be in that spatial setting. There is a deliberate starkness to the art that works because it's Antarctica - there is no need for stylistic flourishes here - and this creates the sense of isolation felt by the characters perfectly.

Is it the most spectacular work? Not really. Arguably not even among thrillers about the first murder in Antarctica (you'd be amazed how many of those are around). But it's still worth a read, particularly for those who are interested in strong characterisation and realistic settings when it comes to such works. For a challenge like Around the World in 80 Books, this book sets up an Antarctic setting perfectly.
Posted by Unknown at 21:37